RPGBomber is, as you can guess from the title, a bomberman-like game. It is also unlike all the other games here based on the Irrlicht-engine, because Langadia++ is still under construction and the latestversion is not available now.

Here will be the latest version of RPGBomber2009. For now it is the release from 04.09.2009, which includes a lite version of the MapEditor calles “mEdit”. Here is the current release for Windows 32 Bit version and Linux.

A short overview of the features and the status of them.

Status:85%
This is the integrated mapeditor, which allows you to create own maps for singleplayer or even for own campaigns. It is easy to use and supports only the basic stuff. You can load your tiles in the tile window to the left. Tab between ground tiles and object tiles if needed. The collisionmode will set for each tile automaticly. You can also set the size of the map if you want, so that you can create huge maps. The maps will be exported as xml. Here is a screenshot from mEdit. 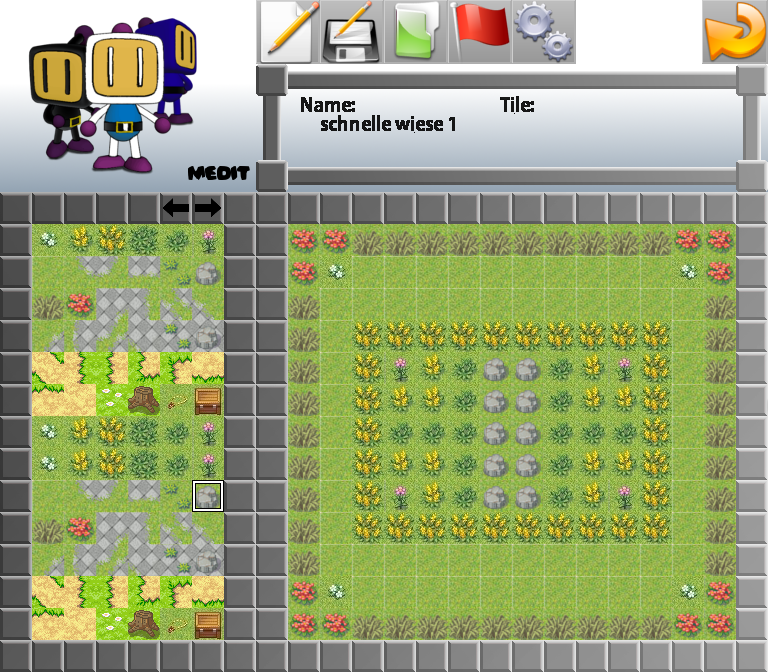 So you can easily generate the map you want. I will post a short tutorial how to use mEdit in a few days!

Status:0%
There will also be a CampaignEditor, which allows you to write a own story, which can be played by other players. I won’t disclose to much here, so pls stay tuned for further information.

Status:0%
As you already read, there will be a story mode. For now I have no idea, which is a good bomberman story^^ but I will deal with it in a while. Anyway I hope the CampaignEditor will lead some people to create their own story, which would help me a lot.

Status:0%
There will be an opportunity, to export your character to use it an the vs-mode. It is basicly a PvP-Mode, where you can play against human-players using the same keyboard. As far as I know there is no irrlicht-support for interenet sessions, so that there will be no internet-vs-mode.

Status:90%
You were ported to a special room. From time to time will spawn many bombs next to you. Your only task is: Survive! Avoid getting hit by an explosion and try to stay alive as long as you can. Here is a screenshot: 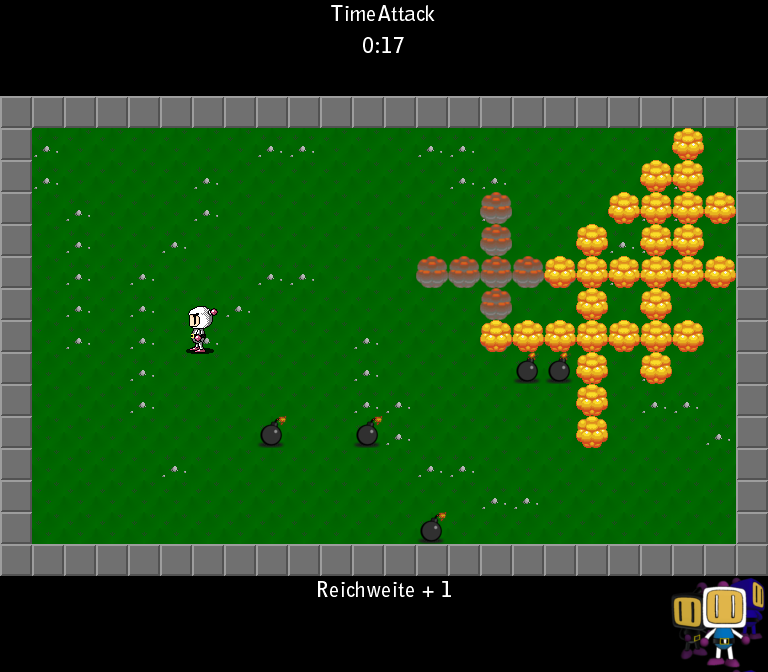 Status:25%
This is the maindifference between RPGBomber2009 and the original Bomberman. Your character won’t die if he runs into an explosion, but he will lose some healthpoints depending on his defense and the opponents attackvalue. He will also run faster if you train his speed-abilities. And for euch map you can use ability-crystals, that means that you can power up his abilities for a while, maybe if you want to defeat a very powerful enemy or want to bash your friend in the vs-mode ;) Anyway, this will be the mainattraction of the game.

RPGBomber2009 is at its very beginning. So if you test it and get bugs please report them with a short explanation. There will also be a newer version soon with a integrated exceptionsystem, which makes it easier to detect bugs, because it automaticly generates a small data, where all the technical stuff is written to. But till then you have to write it on your own =P Anyway, if you want to report something (bugs, hints or whatever) pls contact me at stefan@rpdev.net